Someone sent me a funny-but-true piece on driving in India; it’s attributed to Coen Jukens, ostensibly an employee of the Dutch software firm Baan, who spent a couple of years in Hyderabad. I couldn’t find anything more on Jukens, so I don’t know if the attribution is correct or not. Baan (later acquired by Infor Global Solutions) opened its Hyderabad office in 1998. The earliest version of the article – which has disseminated across the Internet – seems to be from the year 2000.

In the ten years since, I doubt the article has become any less accurate – except that the speed of traffic in all major cities has slowed to a crawl during much of the day. (The picture below was taken in Delhi.)

I stand by my book’s recommendation – expats and visitors to India should not attempt to drive there. Hire a car with a driver instead, read the article, and be not daunted. 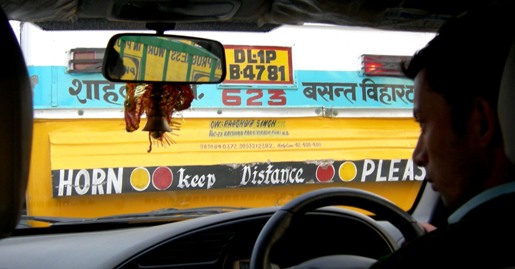 I visited Mumbai recently and agree with the observations about driving. For the benefit of every Tom, Dick and Harry visiting India and daring to drive on Indian roads, I am offering a few hints for survival. They are applicable to every place in India except Bihar, where life outside a vehicle is only marginally safer.

Indian road rules broadly operate within the domain of karma where you do your best and leave the results to your insurance company.

The hints are as follows:

Do we drive on the left or right of the road? The answer is “both”. Basically you start on the left of the road, unless it is occupied. In that case, go to the right, unless that is also occupied. Then proceed by occupying the next available gap, as in chess.

(The rest of the article is under the jump…)

1. Just trust your instincts, ascertain the direction, and proceed. Adherence to road rules leads to much misery and occasional fatality.

2. Most drivers don’t drive, but just aim their vehicles in the intended direction. Don’t you get discouraged or underestimate yourself. Except for a belief in reincarnation, the other drivers are not in any better position.

3. Don’t stop at pedestrian crossings just because some fool wants to cross the road. You may do so only if you enjoy being bumped in the back. Pedestrians have been strictly instructed to cross only when traffic is moving slowly or has come to a dead stop because some minister is in town. Still some idiot may try to wade across, but then, let us not talk ill of the dead.

4. Blowing your horn is not a sign of protest as in some countries. We horn to express joy, resentment, frustration, romance and bare lust (two brisk blasts) or just to mobilize a dozing cow in the middle of the bazaar.

5. Keep informative books in the glove compartment. You may read them during traffic jams, while awaiting the chief minister’s motorcade, or waiting for the rain waters to recede when over-ground traffic meets underground drainage.

6. Night driving on Indian roads can be an exhilarating experience (for those with the mental makeup of Genghis Khan). In a way, it is like playing Russian roulette, because you do not know who amongst the drivers is loaded. What looks like premature dawn on the horizon turns out to be a truck attempting a speed record. On encountering it, just pull partly into the field adjoining the road until the phenomenon passes. Our roads do not have shoulders, but occasional boulders. Do not blink your lights expecting reciprocation. The only dim thing in the truck is the driver and the peg of illicit arrack he has had at the last stop; his total cerebral functions add up to little more than a naught. Truck drivers are the James Bonds of India and are licensed to kill. Often you may encounter a single powerful beam of light about six feet above the ground. This is not a super motorbike, but a truck approaching you with a single light on, usually the left one. It could be the right one, but never get too close to investigate. You may prove your point posthumously. Of course, all this occurs at night, on the trunk roads. 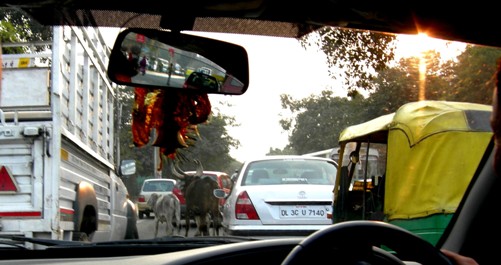 During the daytime, trucks are more visible, except that the drivers will never show any signal. (And you must watch for the absent signals; they are a greater threat.) Only, you will often observe that the cleaner that sits next to the driver will project his hand and wave hysterically. This is definitely not to be construed as a signal for a left turn. The waving is just an expression of physical relief on a hot day.

Occasionally you might see what looks like an UFO with blinking colored lights and weird sounds emanating from within. This is an illuminated bus, full of happy pilgrims singing bhajans. These pilgrim buses go at breakneck speed, seeking contact with the Almighty, often meeting with success.

The result of a collision between a rickshaw and an automobile, this three-wheeled vehicle works on an external combustion engine that runs on a mixture of kerosene oil and creosote. This triangular vehicle carries iron rods, gas cylinders or passengers three times its weight and dimension, at an unspecified fare.

After careful geometric calculations, children are folded and packed into these auto rickshaws until some children in the periphery are not in contact with the vehicle at all. Then their school bags are pushed into the microscopic gaps all round so those minor collisions with other vehicles on the road cause no permanent damage. Of course, the peripheral children are charged half the fare and also learn Newton’s laws of motion en route to school. Auto-rickshaw drivers follow the road rules depicted in the film Ben Hur and are licensed to irritate.

Mopeds
The moped looks like an oil tin on wheels and makes noise like an electric shaver. It runs 30 miles on a teaspoon of petrol and travels at break-bottom speed. As the sides of the road are too rough for a ride, the moped drivers tend to drive in the middle of the road; they would rather drive under heavier vehicles instead of around them and are often “mopped” off the tarmac.

Leaning Tower of Passes
Most bus passengers are given free passes and during rush hours, there is absolute mayhem (hell). There are passengers hanging off other passengers, who in turn hang off the railings and the overloaded bus leans dangerously, defying laws of gravity but obeying laws of surface tension. As drivers get paid for overload (so many Rupees per kg of passenger), no questions are ever asked. Steer clear of these buses by a width of three passengers.

One-way Street
These boards are put up by traffic people to add jest in their otherwise drab lives. Don’t stick to the literal meaning and proceed in one direction. In metaphysical terms, it means that you cannot proceed in two directions at once. So drive as you like, in reverse throughout, if you are the fussy type.

Lest I sound hypercritical, I must add a positive point also.

Rash and fast driving in residential areas has been prevented by providing a “speed breaker”; two for each house. This mound, incidentally, covers the water and drainage pipes for that residence and is left un-tarred for easy identification by the corporation authorities, should they want to recover the pipe for year-end accounting.

If, after all this, you still want to drive in India, have your lessons between 8 pm and 11 am – when the police have gone home. The citizen is then free to enjoy the ‘FREEDOM OF SPEED’ enshrined in our constitution.

Having said all this, isn’t it true that the accident rate and related deaths are less in India compared to US or other countries ?

4 Responses to (Don't) Drive in India