A New Symbol for the Rupee

For decades, India has represented its currency, the Rupee with “Re” for Re 1 or “Rs” (for multiple rupees). Other sources clarified it to things like “INR”;  after all, the Rupee is the currency of several South Asian countries including Pakistan, Nepal and Sri Lanka.

Now, the Indian Rupee has a shiny new symbol, which I can’t type because it’s not on the keyboard. I like it,  though I can’t tell how practical it’s going to be or whether it will in fact get used. [ETA in Feb 2011: It does seem to have caught on; I saw it  everywhere when I visited India.]

Some while ago, India’s Finance Ministry decided that the rupee deserved a symbol of its own, the way the UK pound has, or the Euro; and in February 2009, it held a design competition.  It wanted a symbol that would represent the “historical and cultural ethos of the country.”  This is the winner, from D. Udaya Kumar.  He’s a post-grad student from Indian Institute of Technology (IIT) in Delhi, now going to teach at IIT Guwahati.

The new symbol comes with a lot of design analysis, presumably to demonstrate that historical and cultural ethos. Given that it’s India, we also have a controversy. (As I said in my book, India Business Checklists, controversies can blindside people doing business there. This time, no companies were involved in the making of this dispute.)  But first, the design.

It’s based on the Devanagari symbol for the “ra” sound (shown in the second square in the picture.) Devanagari is the name of the script in which India’s official language, Hindi, is written. Hindi can actually be represented in other scripts as well, but this is the official one. (Quite incidentally, this is also how my name Rupa, written in Devanagari, starts. Rupa and Rupee are both derived from the word for silver.)

It also incorporates the letter R of the Roman alphabet.

And then there are the more fanciful explanations: That the two parallel lines at the top recall the Indian flag. That they also resemble the “equals” sign, representing balance in the economy.

According to www.saveindianrupeesymbol.org/ the winning candidate broke the rules, submitting four designs when the rules specified two. There was also something about being applicable to a standard keyboard in the Indian National Language script. And there’s been some buzz about an inadequate selection process.

It’s also true that the design doesn’t closely resemble any of the Government’s finalists. 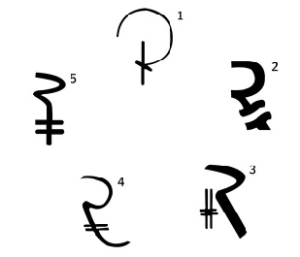 But I have to say I like the final one better than any of those. The process may have been broken, but the result seems okay. May be better than the other way around?

2 Responses to A New Symbol for the Rupee