Dolls’ clothes and E-readers: What does it all mean?

Two things happened recently that made me think about convenience, competition and change, and where electronic markets are taking us. First: I got an e-reader, specifically, a Kindle. Second: We bought clothes for a doll. 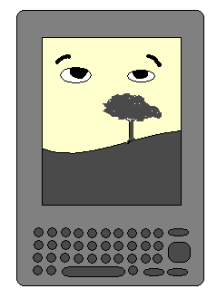 At first, I wasn’t sure how I liked my new Kindle, though I routinely read book-length things on my laptop. I registered it to Amazon, and bought my first book for about $9.  It took some getting used to. But I could see it as the wave of the future.

My IIM friends might recall my arrival on campus with a large tin trunk, containing few clothes and many books. Things have only gotten worse since then. Our entire hallway is lined with a long bookshelf, stuffed full of books. We have three bookshelves in the living room, one in each bedroom, and another in the downstairs entry foyer. And then we have furtive stacks of books breeding in several corners. The Kindle is going to take the pressure off these shelves. Like my film camera, stuffed into a drawer with a half-used film-roll still in it, books are already starting to look a little obsolete.

But that’s old news. What I found startling was this: The other day, I was trawling through a discussion forum when I came across a book that sounded promising. A mystery, set in San Francisco, in the late 19th century. Clever and resourceful heroine solves murder. [ETA: M. Louisa Locke’s ‘Maids of Misfortune.‘] It was self-published. And it was downloadable, from the author’s own website. Two minutes and four dollars later, it was mine.

Why was it startling? Mainly, because it was a complete shift in the market. I’d thought of e-books only as a way for regular publishers to deliver the same paper books in an alternative format. This, though, was from the author herself. The book was as professionally produced as any on Kindle. (And it was a thoroughly enjoyable read, if you like period mysteries set in interesting cities.)  Self-publishing and vanity presses have always existed, but the main barriers have always been quality control and distribution. This doesn’t solve the issue of quality control, but cheap pricing lowers the barrier for reader experimentation. E-books are cheap to produce, and the author will likely break even at tens of books, not thousands. And the distribution issue is solved. You don’t have to worry about getting your book into bookstores any more.

There’s a brand of dolls called “American Girl” (formerly an independent company, it was later acquired by Mattel). It started as a series of dolls from various periods in American history, and each doll came with a story and a period-appropriate wardrobe. Now, it’s a sort of Barbie-as-a-nine-year-old: A standardized 18-inch doll that comes in many different hair, eye and skin colors. According to an article I found on line, some people sew clothes for these dolls as a hobby.

“Crafters who make 18-inch doll clothes by hand generally don’t sell them, saying they cost too much in materials and time to be marketable,” the article said. The people they interviewed, Sandy Taylor and Judy Banducci, said they never sell their creations.

This makes intuitive sense. I’ve made doll’s clothes, too, and it’s picky work. Even if you’re well-organized and good at it, a dress would take 1-3 hours to make. Then there’s the cost of the materials and the packaging. There’s no way you can sell these things at any reasonable price.

Except it’s not true. There’s a website called Etsy.com, which features only handmade or vintage products. (It’s primarily a US site.) When I searched there, there were some 6,000 items of clothing for the dolls. Outfits — like jeans or dresses or coats or even entire ensembles — were priced at $10-20. I’m guessing that yields a return of $4-5 per hour, well below minimum wage. We ordered jeans and a wool coat. They’re beautifully crafted, individual pieces. The jeans have the design detail on the rear pocket you find on actual jeans. The coat, lined, has hand-sewn press-studs under regular buttons.

What’s going on here? This time, it’s not mass-produced stuff from cheap labor in China and India. It’s competition from Americans who do this as a hobby, and are literally willing to sell below their real cost of production if you cost their time at minimum wage. It’s a labor of love.

WHERE  IS THE WEB-MARKET GOING?

So I guess the question is, where is this electronic market taking us? Some thoughts:

More thoughts/ ideas/ observations?
(Comments are welcome, thought they may not show immediately — owing to spam, I screen all comments.)

2 Responses to Dolls’ clothes and E-readers: What does it all mean?