I spent most of last Saturday at the Coyote Point Yacht Club, not sailing but attending the IIM USA annual convention.  Airplanes came in to land over a seascape of moored boats; the San Mateo Bridge stretched into the distance. But the scenery couldn’t compete: the presentations inside the room were more compelling.

IIM USA is the alum organization for graduates of all the Indian Institutes of Management (IIMs). There used to be only three (A, B & C – Ahmedabad, Bangalore and Calcutta); now there are 6, and more are planned. And enough of these graduates are in the US for a viable and interesting alums group. Ashima Jain, IIM USA’s founder president, did much of the organization. As I said in an earlier post, she’s one of those people who make things happen.

[ETA: IndiaWest carried a report on the same convention, here.]

FROM MEDICINE TO MORTGAGES

The first half of the conference had a healthcare theme. David Green, keynote speaker, is the president of Aurolab, an India-based non-profit entity that provides medical supplies at 5-10% of their commercial cost. Their first product was an intra-ocular lens, which they sell for $4 and commercial companies sell for about 20 times that. It’s achieved by trimming costs and margins — and getting the best professional help. As David pointed out, it’s about using the same set of tools an MBA degree provides, but instead of using them to create shareholder value, they use them “in favor of poor people.” Next up: An inexpensive, Bluetooth-enabled hearing aid, priced at 10% of the current cost of a good hearing aid. Though designed for India, it may well be marketed in the US too.

Pradeep Jaisingh chased a dream back to India from Dallas: World-class cancer care in India. He spoke about how his original vision of building a cancer hospital in Delhi morphed, which proved impossible because of real estate costs, morphed into a chain of “hospitals within hospitals.” His company, International Oncology Pvt Ltd, partners with existing hospitals to set up specialized cancer care units within their institutions. Takeaway quote (which resonated with me because it could be the theme of my book): “The opportunities are tremendous, the challenges  — formidable.”

Professor Shivendu of UC Irvine, a former IAS bureaucrat from India, spoke about Piracy and Privacy on the Web. The Internet facilitates the first and reduces the second. After lunch, a panel of entrepreneurs shared their stories. Nickhil Jakatdar amused us with his tale of founding a start-up with little more than a partner and a great deal of enthusiasm. When they won a business plan competition at US Berkeley, an angel investor wrote them a check for $350 K, and they were off and running. BV Jagadeesh went a more traditional route, raising money against his home. Anna Patterson, once and future Googler, left them to start a new search engine company before being wooed back. And Amit Garg is on the other side of the table: he’s at Norwest Venture Partners and moderated the panel.

Professor Samir Barua, Director of IIM/Ahmedabad, held a discussion about the Institute’s directions as competition increases. In India, the brand is very strong. They get 220 thousand applicants for 3 thousand places (across 6 Institutes). Internationally, it’s less well-known. I asked about women students; back when I was there, I was one of 8 women amid a class of 110 students. What was the situation now? Not much different, it turns out: around 20% of the applicants and between 9% and 17% of the students are women. The discussion then turned to what the IIMs could do to become better-known internationally. Having originated as government-funded institutes, they do have limitations, though those restrictions are gradually being removed.

After that, Gopi Kallayil  (also at Google) spoke about caring for the “Innernet” — the brain and body we live in. His five tips:

Professor Sanjiv Das of Santa Clara University spoke about defaults on home mortgages, from the point of view of the lending banks. The only factor, he said, that determined whether an owner would default was how far under water the loan was. If the value of the loan greatly exceeded the market value of the house, the owner was likely to default. In those situations, banks that wanted to modify loans would be best off reducing principal; next best would be reducing the interest rate. Changing the term of the loan didn’t help.

The evening wrapped up with a unique Bollywood dance performance from the seniors of the Indian Cultural Center at Milpitas. The Jollywood Troupe comprises men and women from 60 to 80, and they gave a delightful show with energy, romance, and finesse. At the end of it, they pulled everyone onto the dance floor to join them. 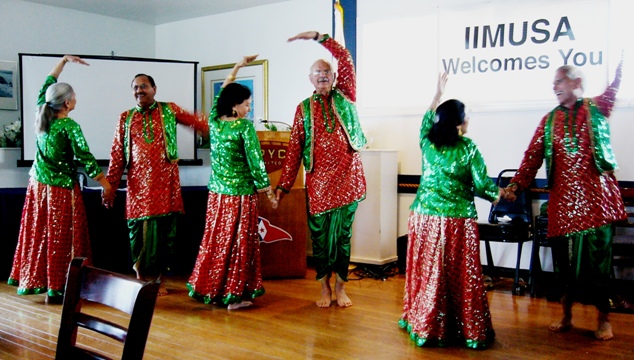 And the icing on the cake:

The City of Fremont proclaimed 23 April 2011 as IIM USA Day! 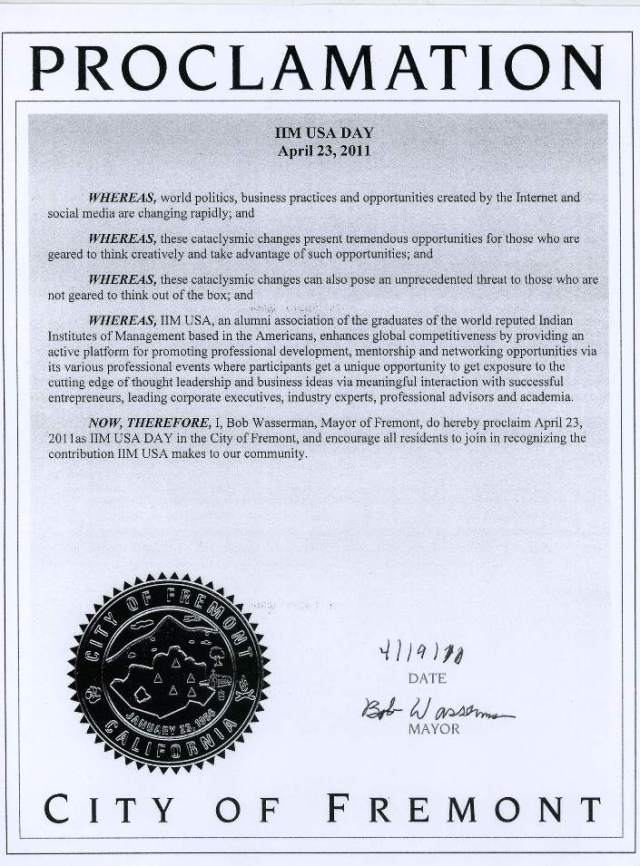