India’s Population, the Decennial Census, and me

For a country where a quarter of the people are still illiterate in any language, India conducts a pretty decent ten-yearly census. 2011 is a census year, and the provisional results are out for some of the main indicators. (The actual results won’t be issued until next year after they’ve had a chance to check and reconcile them.)

I’ve been watching these numbers from around 1971 with the intense interest of  a dieter stepping on the scales. India had under half the number of people it has now. Back then, population growth was considered a problem verging on a disaster tending to a catastrophe. Books like Paul Ehrlich’s “The Population Bomb” dominated the discussion. Population growth is still a problem, further stretching already over-stretched resources and building in grounds for conflict. But at least in some areas, people have started talking of the Demographic Dividend, and acknowledging the energy, enthusiasm, and potential of a youthful demographic structure.

So what’s the news this year?

First: India’s population growth rate is declining significantly. From a high of 2.24% per year in the decade ended 1971, it’s down to 1.64% per year in the first decade of the Twenty-first century. Back in 1971, it seemed it would never go down, no matter how much the government pushed the Family Planning message: Do ya teen bachhe bas (2-3 kids, enough). 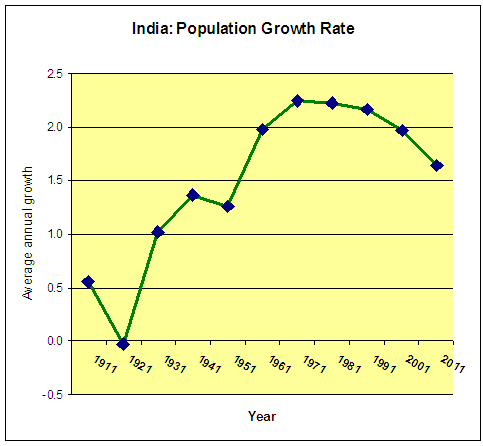 Of course, it’s a small percentage of a very large number. In ten years, between 2001-2011, India added 181 million people: One Brazil. Five Californias. Still, back then, we talked of India adding one Australia each year. That would have meant an addition of 220 million people over a decade, not 181 million.

By 2025, India expects its population to overtake China’s — which had, after all, implemented its one-child policy about a generation ago. 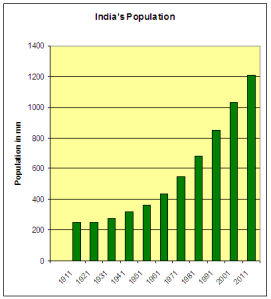 There are actually fewer children under 6 years old in this census (159 million kids) than in the previous, 2001, census (164 million kids). The under-sixes are now 13% of the population, compared with 16% ten years earlier. In a not-so-encouraging development,  the numbers have fallen more sharply for little girls than for little boys: it’s 2.1 million fewer boys, but nearly 3 million fewer girls.

That’s nearly a million missing girls, and it suggests selective abortion (and possibly infanticide or neglect), owing probably to a huge cultural son-preference. Every decade since 1961 there’s been a growing disparity between the girls and boys under six. On the positive side, the sex ratio (number of women per thousand men) has improved slightly from 933 to 940, suggesting that older girls and women are surviving better.

I’d give two cheers for the improvement in literacy. When I was a kid, most people, especially women, couldn’t read. It’s not true any more, and there’s a growing market for print media in India’s many languages. Some 82% of males and 65% of females can read, up from 75% and 54% ten years ago. In another ten or twenty years, perhaps, nearly everyone will be literate.  This isn’t a brilliant achievement, considering that Sri Lanka did it a long time ago, as did the Indian state of Kerala. But it is an achievement.

This graph of India’s population, based on UN projections, shows three different futures out to the turn of the century.