If ‘The Donald’ Were a Book, He’d be a Bestseller

(An earlier version of this article was published in Naradanews.com )

When I read The Bestseller Code recently, it felt oddly familiar. It reminded me of Donald Trump. 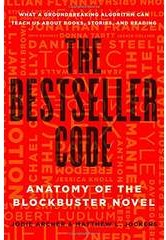 This new book analyzes the secrets of bestselling novels. Authors Jodie Archer and Matthew L. Jockers developed a computer algorithm to dissect and measure various aspects of a novel, from the number of times the author uses the word “of” to the topics and themes. Then they had the computer ‘read’ thousands of books, and differentiate between bestselling books and those that weren’t. The algorithm succeeded 80% of the time.

So why Trump? Here was a candidate who emerged from nowhere to defeat all the front-runners for the Republican nomination. He was the bestselling candidate. Whether for supporters or opponents, his campaign always drew attention.
The book describes the algorithm’s criteria that differentiated best-selling books from others.

Many of them mapped perfectly on to Trump’s campaign. Here’s how:

Focused themes.
Best-selling books limit their themes. The authors give the example of John Grisham and Danielle Steel as iconic best-seller authors. A single theme took up about one-third of the book. Secondary themes – and only a few of them – took up the rest. That gave the novels a cohesiveness that made them easy to follow.

Trump’s campaign does this. His main theme is: “We need somebody who can take the brand of the United States and make it great again.” The underlying appeal implies that America is not what you want and I can change that. (I’ve taken the Trump quotations from: http://www.yourdictionary.com/slideshow/donald-trump-20-most-frequently-used-words.html)

Implicit conflict.
Grisham’s main theme is always legal; his secondary theme is everyday life, warm moments of human connection. Steel’s main themes are domestic, but her second commonest theme is ‘Hospitals and medicine.’ In both cases, there’s a threat to the family – legal or physical.

Trump’s campaign brings in the danger of the immigrant, the outsider. “They’re pouring in. They are bringing drugs, they are bringing crime.” The conflict he implies is that they’ll have to be stopped in order to “make America great again.”

Everyone can understand when Trump talks about his work. He’s not from an esoteric political ivory tower or the halls of government. He’s a businessman. And wife Melania and daughter Ivanka provide that sense of human connection.

This is one of the most important things that separates best-sellers from others – the emotional pacing and plot turns. Bestsellers start with a ‘hook’ that draws you in. Then something changes. After that, things get better and worse more or less like a sine curve.

(The authors of The Bestseller Code actually graph these curves, finding seven basic patterns for novels.) In the end, either the emotional curve turns up into a happy ending, or down into a downbeat one that often implies a sequel.

(This graphic is from The Bestseller Code. Used here as “fair use” with a link to the book.)

Trump’s campaign followed this pattern quite closely. The initial hook was, look, a candidate who’s entertaining! He’s not spouting all that boring language the other candidates use. He’s watchable. If you look at the graph on fiverthirtyeight.com, it’s clear that all eyes will be on him right to the end.

The graph above is taken from fivethirtyeight.com as of November 6th. (I edited out the non-Trump lines.) It doesn’t actually tell the whole story, because it doesn’t cover the primaries… when Trump defeated, one by one, all the other Republican contenders.

The authors had the algorithm analyze the writing style of these thousands of books, and found each author had a style that was as easily identifiable as their DNA. They also found a difference between bestselling authors and others in the way they wrote.

Trump has mastered colloquial, straightforward speech – which may be why teleprompters don’t work for him. There’s nothing convoluted or complex about his language.

He also uses the ellipsis in its spoken form. For example, the now famous: “Although the Second Amendment people, maybe there is. I don’t know…” (he was speaking of his opponent Hillary Clinton, and the 2nd Amendment gives Americans the right to carry guns).

estsellers have strong characters with ‘agency’ – that is, they make things happen. The characters need and want things. They are not passive. Their actions are described with strong, active verbs: “Tells, sees, hears, smiles.” Or “pulls, pushes, starts, works, knows.”

Trump has mastered this. It’s why it was so devastating when he called his opponents Jeb Bush “low-energy” and Marco Rubio as “Weak like a baby.” Or when he called all his competing Republican nominees weak. “All of ’em are weak, they’re just weak. Some of them are fine people. But they are weak.”

Of himself, he says:

“Show me someone without an ego, and I’ll show you a loser — having a healthy ego, or high opinion of yourself, is a real positive in life!”

“I am worth a tremendous amount of money” and “I have had tremendous success.” Not to mention, “I’m, like, a really smart person,” and “I am strong; politicians are weak.”

Bestsellers, apparently, often have the word “The” in the title. Examples the authors mention include The Goldfinch, The Firm, The Circle.  It’s probably a coincidence, but remember when Donald Trump was called “The Donald”?

My analysis doesn’t look at whether any of the statements are factual or not. That’s not an issue with a bestselling novel, which is obviously not “true.” The questions for a novel are: is it engaging and is it believable?

It seems as though Trump is being held to the same standard. For nearly half of America, Trump is a strong, active candidate with a simple and gripping story. He’s believable if not factual.

I'm an international Business Consultant; author of "India Business Checklists" published by John Wiley
View all posts by webmaster →
This entry was posted in General and tagged Donald Trump, The Bestseller Code. Bookmark the permalink.

5 Responses to If ‘The Donald’ Were a Book, He’d be a Bestseller